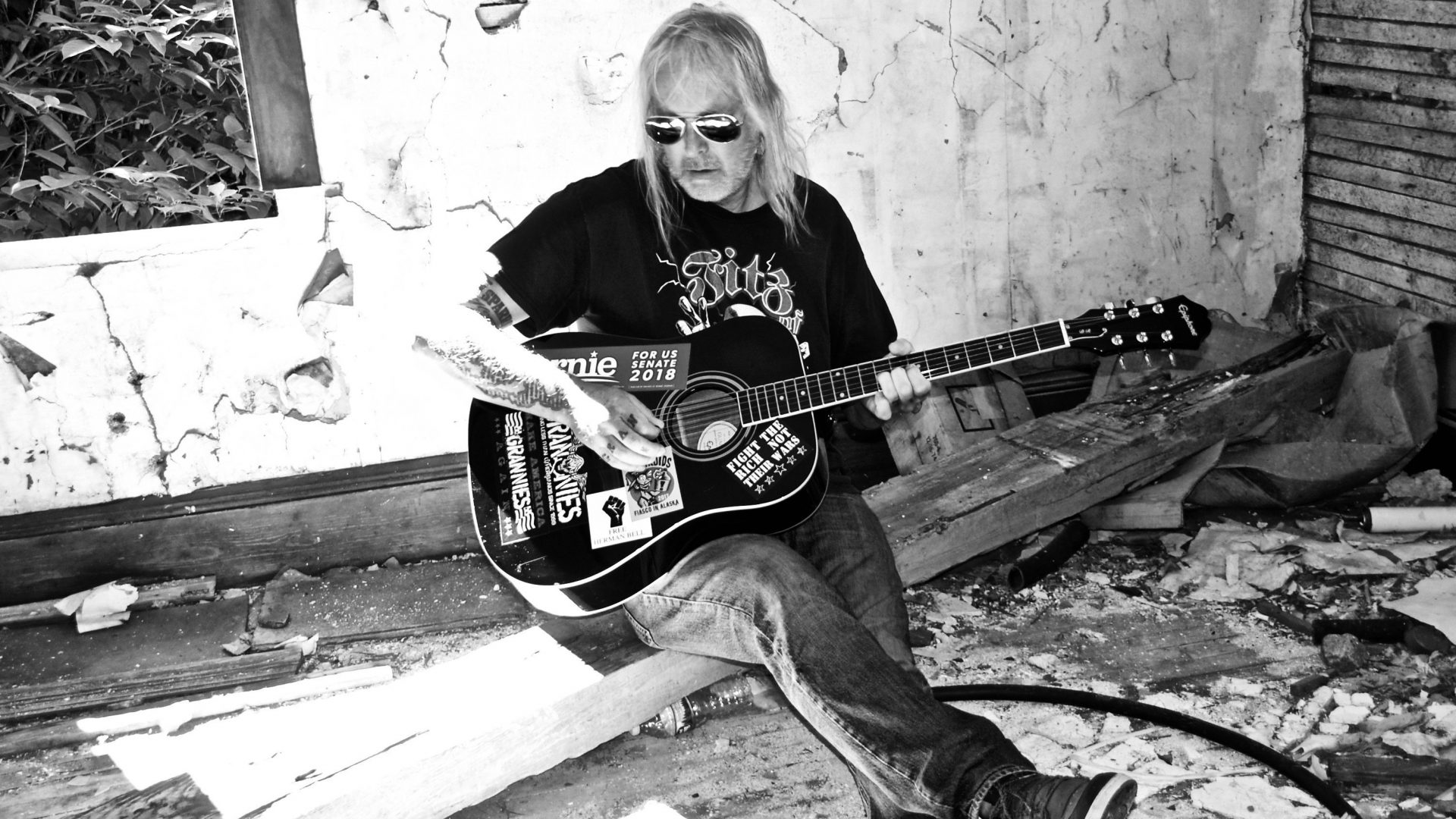 My current band is REQ’D. They are based in Oakland, California.

My previous bands include the Grannies, Ain’t, HULLABALOO, and Oddly Enough.

That’s the short version. Here’s the longer version of my story:

I was born in New Jersey and moved to a tiny town in Massachusetts when I was 1. I grew up in that town with the one police car, the one gas station, and the one grocery store — and when I was a teenager the town got a pizza place. I have two younger brothers, and we pretty much played together in the surrounding woods as you couldn’t even see any other houses from ours.

As luck would have it, renowned music biographer Peter Guralnick lived a half mile away. I would babysit his kids as I got older.

My musical career got off to a slow start. First I tried and detested piano, then I sucked even more at B flat horn (what even is that?). I played drums in the junior high band and when my Mom came to a concert she later remarked that she could totally hear me…because I was the only one playing out of time. Thus I became a guitarist by default.

I got a ¾ electric guitar at a yard sale, and my first amp blew when I struck my first chord. When I mailed my check to Virginia to purchase my first full-size electric guitar I was ripped off and lost the money. (To this day, Virginia is one of the only US states I have never played in. And that is on purpose.)

When I was 17, I was bitten by a 3-legged dog and had to get my right wrist stitched up. This may have helped or hurt my guitar playing, who knows?

I eventually moved to the smallest city in MA, Newburyport, and tried to figure out how to put a band together. We played shows in cow barns, in cow pastures, friends’ apartments, etc. In 1984 I was in a 3rd wave ska band called ODDLY ENOUGH, and we actually played in a Boston club! Woo hoo, big time. The club burned down a month later.

I then got up the nerve to move to a larger city [Boston]. To be honest, a few run-ins with the local constabularies might’ve had something to do with the move…. After I left Newburyport, the studio apartment I shared with my pal Harry (which regularly had upwards of 20 kids crashing at it) was so graffitied that the city passed an ordinance raising the minimum age to rent an apartment to 25.

In Boston I met Thomas Quinn, Jr – a Berkeley music Trumpeter from Ottumwa IA who would be a friend and musical co-hort for the remainder of my life. Together we tired of our ska band being drowned out by the metal bands next door at our practice space so we started HULLABALOO. A grunge/noise band now semi-legendary in Boston music lore. We’re on compilations with Nirvana, Melvins, Hard-Ons etc. With my then girlfriend JJ Gonson as band manager we toured the USA for the first time. I had never been west of Chicago prior to this. JJ was also beginning her career as a well-respected photographer. She and I are still very close and she currently runs the best rock club in Boston [ONCE].

We would play with bands like the Rollins Band, Killdozer, Pussy Galore, Hickoids, Bullet LaVolta, UK Subs, Urge Overkill, Galaxy 500, Cows etc. At CBGBs in NYC I broke a guitar and less than a month later, sitting in my living room in Watertown MA, I would trade it with Kurt Cobain.

In 1990 I moved to San Francisco and started the band AIN’T. My future wife, Laurian Rhodes, fronted the band. I toured Europe for the first time with this band. Elliott Smith and I become friends.

I also rekindled my friendship with esteemed producer Jack Endino, who recorded the last 2 AIN’T albums. I have worked with him ever since. He always makes me sound better than I really am (don’t tell anyone, OK?).

In 1999 I started The Grannies with singer Dean Scheben and AIN’T drummer, Chris Sanborn. Inspired by the Mummies, the Hellacopters, TurboNegro, and the Hickoids, we dressed like old ladies and played loud, fast, irreverent punk rock. We did that for the next 20 years, touring Europe 4 times (my first son learned to walk in Rotterdam on the first of those Euro tours) as well as the US. We recorded 9 albums over our career, all with Jack Endino. Eventually, The Grannies ended up on San Antonio’s Saustex record label owned and run by our old pal Jeff Smith.

My newest band is REQ’D (pronounced ‘wrecked’). I got the name from the tiny ‘MAIN REQD’ dashboard light in my car.

#1~ I had burnt out on my globetrotting punk rock band The Grannies. We toured for a good part of the last two decades, and my onstage aerobatic antics were taking a toll on my body. I want to be able to walk in my old age. [Well, so much for that, as I now have arthritis in both knees.] More importantly, our sons are now teenagers growing up in a major metropolitan city (Oakland, CA) and I want to be around for them.

#2~ I had thrown together a group of neighborhood friends a few years ago to record a song I wrote for my son and his fight with Leukemia. Originally titled “Song for Blixa,” it came out so great and with such minimal effort, it made me think I could do a whole record like this. (Blixa is in total remission, BTW.)

Starting in March 2018, I recorded 6 songs with a core group that included:

I attempted some covers as well, songs I’d always wanted to try by Nick Cave and Bonnie Tyler.

There was no band yet; I just kept adding musicians here and there utilizing 3 Bay Area recording studios. The basic game plan was to bring these people to the studio, run them through the songs, and then record them. I wanted to try different people, and I think that through my many decades of working in bands & recording studios I was able to intuitively guess what would work. Keep in mind that I’d never worked with most of these folks before, though I knew them all well.

And it did work. Splendidly!

I recruited my old Hullabaloo band mate Thomas Quinn to play saxophone & trumpet. TQ had also been on a few of The Grannies last tours as well.

I did some duets, too — one with Rachel Sager Sales & another with Hilary Reed. Both women have exceptional voices and added a ton to my somewhat challenged vocals. I also recorded with my wife Laurian Rhodes (singer in our ’90s SF band AIN’T & currently in Future Chorus, an awesome protest group). And I recruited Anthony Pulsipher, who’d played on the Blixa song and lives down the street from me. He’s a great lead guitarist who spent time in both Seattle and Kentucky.

I wrote a new song called ‘CAR’ (all songs on the LP would have one word titles) and recorded it with drummer Tony T. Sales (not to be confused with his Dad, bassist Tony F. Sales (Bowie, Iggy etc)) the same day! There will be a killer video of CAR out anyday now.

I recorded another two songs with an old friend, Michael Israel on Drums. Michael has played with Iggy, Flock of Seagulls, Nora Jones and tons others. I utilized the amazing violin playing of Everyone’s Dirty Sivan Lioncub on the Nick Cave song and the Bonnie Tyler song.

Of course my final plan was to get my favorite studio engineer/producer Jack Endino to mix the album. Jack has recorded and/or mixed the last 12 albums I’ve been a part of. IN October of 2018 I went to Soundhouse in Seattle to mix our debut album. Jack’s wife, Mia Katherine Boyle (MKB Ultra), added a great chorus vocal to the last song on the album. I used photo taken by our sons for the cover shots and the album was finished. Dedicated to my immediate family I called it ‘Fall In Love On Hate Street’. This references where Laurian and I fell in love (Haight Street SF CA) and also I meant it as a commentary on the troubled times in which we live. Hate rhetoric is now commonplace starting with our current president and though I as an individual citizen cannot do very much, I can choose to interject as much love into the world as I can.

We played our first gig with Texas’ Hickoids in August 2018.

The album was released on February 14, 2019 on my label, Wondertaker.

At the start of 2019, I asked last year’s REQ’D participants if they wanted to go on, and happily 6 of them did!

Thus the band came into shape. Current membership consists of:

Richard on Drums, Percussion and Vocals

Me on Vocals, ’69 Telecaster & crappy acoustic

We released 3 new songs as ‘Gone Awry EP’ on CD. That CD also includes the entire original LP (which had originally been on vinyl only).

REQ’D is currently in the recording studio banging out new songs for our next album, tentatively titled OUTSIDE ART.